Fairy Tail Vs One Piece 0.6
All Games » Action Games

Fairy Tail Vs One Piece 0.6

The creators of the excellent "Bleach vs Naruto" series give us here a new fighting game, in the same vein, allowing to have battles between the heroes of 2 other cult mangas: One Piece and Fairy Tail. This first promising version lets you play 6 characters: Luffy, Zoro and Nami from One Piece and Natsu, Lucy and Gray from Fairy Tail. Each character has his own attacks and the many available techniques allow for epic fights. The menu is in Chinese but you will find below a screenshot in English to facilitate your navigation. 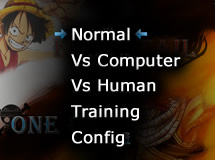