Luffy and all his friends are back in this new 0.5 version adding the character Sakazuki aka Akainu, the Marine fleet admiral. 9 other cult heroes of the series are playable: Luffy, Zoro, Ace, Crocodile, Sanji, Nami, Buggy the Clown, Dracule Mihawk or Edward Newgate. One Piece Hot Fight is a nervous fighting game offering to face the computer, a friend on the same computer or even to form 2v2 teams. Use the screenshot below (in English) to navigate through the menu. 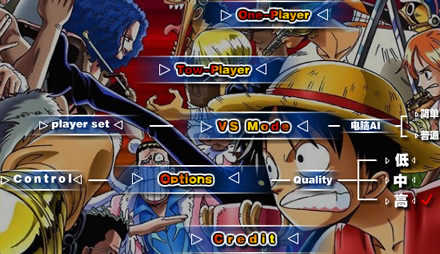